My wife has got a wide range of musical tastes and only occasionally will I hear something playing in her car that I don’t enjoy. Certainly, without her extensive pallat of auditory awesomeness  I would not have been exposed to this song by the Magnetic Fields:

Or this cover of a Magnetic Fields song – and one of my favourite covers of all time – by The Airborne Toxic Event (whom we also saw play live in Toronto a few years ago):

So, whenever she and I enter into a discussion about which album from a band is better than one of their others, it’s common for me to disagree and then after some listening, acquiesce to my wife’s better judgement. Case and point, The Tragically Hip’s Up To Here versus Road Apples. I was always on the side of Up To Here and her on the side of Road Apples, but after a couple listens in the car on the way to work I have flipped sides.

Such is not the case for The Watchmen and their first two albums. McLaren Furnace Room is their first album and is Jodi’s favourite from the band and for a long time I was in agreement with her on it. It’s a killer album and to this day I’m left to wonder why it didn’t vault the band into more rarified air. However, after many, many, many listens of McLaren and their second album, In The Trees, I’ve changed my tune.

Welcome to the third installment of the Sound of Music – My Top Five Albums Of All Time:

In The Trees by The Watchmen 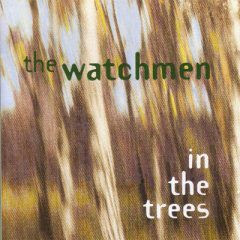 Track Listing:
As a reminder here is the main criteria that went into making my choices:

Looking at my album evaluation criteria seeing this album in my top five shouldn’t come as a surprise. I might occasionally skip over Boneyard Tree and Vovo Diva but even as my least favourite songs on the album I’ll find myself singing along. When listened to end-to-end I find the arrangement of the album to be just about perfect, from the first chords of the hard and heavy 34 Dead St. to the perfect solo bass note played by Ken Tizzard that echoes in your head to end the album, In The Trees, takes me on a journey I never want to end.

The memories invoked when I hear any song off this album vary, but all begin in first-year university, where in 1993 my friend Riaz introduced me to the band. Naturally, I have oodles and oodles of memories ranging from listening in Riaz’s room to seeing the band play at various clubs and bars around town. Probably the best one, though, is the time Riaz drove me into Toronto to go see them play at The Legendary Horseshoe Tavern.

If you’ve never been to The Horseshoe, you’re truly missing out on a piece of Toronto history. Renowned for being a bit of a dive, it has been home to some of the most amazing musical talents ever known and their walls are adorned with posters, news articles and ticket stubs from all the acts.

This one particular night Ri and I were there early, he liked to make sure he had a spot right up front by the guitarist, Joey Serlin, but after enjoying a few beverages waiting for the show to start we found ourself in need of relieving ourselves. Downstairs to the basement washroom we went. Now if you’ve never been to The Horseshoe you’re missing out, but if you’ve never been to the men’s room at The Horseshoe you’re not missing a thing.

We walked into the john and who would we find zipping up just as we were heading in? Danny. Thinking the pisser wasn’t the best place to drum up a conversation we did our business and then wandered out into the hallway, peering into a stairwell on the off chance we could sneak up backstage. Danny was sitting in the stairwell having a smoke. A smoke! (Sorry if I’m exposing a dark secret, Danny). Riaz asked if it was cool if we joined him for a cig, and he said he didn’t mind, so we spent the next cigarette’s worth of time shooting the shit and just enjoying a subdued moment. Three guys having a smoke in a stairwell.

Butting out and stomping on what remained of his Du Maurier, Danny said, “Sorry guys but I gotta get into the moment here before I head out.” Riaz and I nodded and thanked him for the chat and wished him a good show. “Thanks guys. Nice meeting you,” he said as Ri and I headed back upstairs to a now packed floor with a couple hundred folks unaware that we had just had the coolest and most surreal experience of our brief music-loving lives.

The emotional impact of this album is probably stronger than any other. I met my wife sitting in Riaz’s room back in 1993 and even took voice lessons and put a band together to play a Watchmen tune for her for our anniversary a few years ago. I feel so much joy when I hear one of their songs on my iPod (which is often because I have a TON of WM music). On the other end of the spectum, Riaz introduced me to both my wife and The Watchmen’s music and he’s gone now, so hearing many of their songs, even the happy ones, makes me sad. If you listen carefully you can hear In My Mind playing in the background at the beginning of my memorial speech and reading.

So there you have it, the third (in no particular order, yet) of my Top Five Albums of All Time along with some of the reasons why. A dozen great tracks invoking myriad emotions and half a lifetime of memories.

You can find The Watchmen music for sale on iTunes here along with some live show downloads here and some FREE tracks / shows for download here. 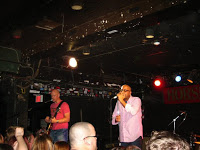