When I started writing my novel I had a grand idea that it would be at least 100,000 words. Before I had even determined the full arc I knew I wanted to write 100,000 words. It was a nice round number and as far as I could tell it would make a pretty decent length book. The problem was that as much as I wanted the 100k the more I wrote the more I discovered that it was either going to be a stretch to get it there or it would wind up being a 150,000 word marathon.

So what’s the right number? If quantifiable numbers are your thing you can look to the Smashwords article from May 2013 for a very telling answer. A book’s success can be directly tied to its sales and the average length of the top 100 books on Smashwords is a hair over 115,000 words. Of course even Smashwords says flat out that most authors would be thrilled to be in the top 500. So, if you look at their top 500 the average length is just a bit over 77,000. Double the ranking and it only drops a couple thousand words. So, if the top 100 is any measure (which it should be) you’re writing a good length novel. If you’re happy sitting in the top 1000 (which you should be) then you can probably do with 40,000 words less – almost an entire novel – and still be doing just fine. Of course, when you look at the same Smashwords data you’ll see that the top book (#1) outsells #50 by a margin of 7 to 1 and #50 outsells #500 by another 5 to 1. I’m sensing a trend here… 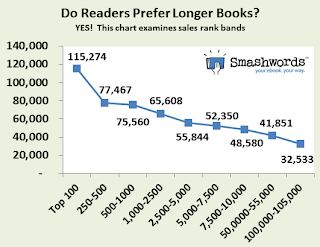 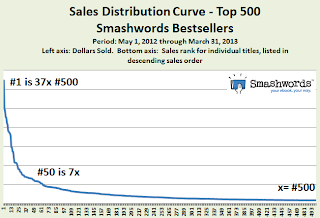 That same Smashwords article also had a price point comparison and it looks like FREE and 99¢ are the big winners, but $3.99 seems to be the magic number, which if you’re an indie author could mean a serious advantage over someone who’s traditionally published and has all that additional overhead – and cost – associated with their book (that, or the author is taking a serious cut when it comes to royalties).

My theory seems to hold especially true for short story erotica. You may be asking, how is it that people can sell erotica for $2.99 or even $3.99 for a 10,000 word short story and get away with it? That’s the same price as an average length (and commonly priced) full length 115,000 word novel! Well, in addition to the time factor the the answer also lies in re-usability. You’re not likely to re-read that 400 page novel over and over, but any time you’re in the mood for a quick… um… “break”, you’ll bust out that erotic short story quicker than a prisoner on conjugal visitation day.

Now, as the writer of a blog (a new post every Sunday here at Potato Chip Math) I’ve been long curious about the optimal length for a blog entry. Now, it seems that if you go looking for this information you’ll find almost as many answers as you find experts. One recent article I found was particularly interesting. It basically says that people value longer copy over their shorter counterparts. While I think there is definitely some truth to that statement I think that the author goes out of his way to over-simplify. At one point he simply compares length of post (greater than or less than 1500 words) to number of tweets and Facebook “likes”. The posts greater than 1500 words got more of both. The scientist in me is going absolutely crazy over this. How many other variables are in play? Too many to be able to say with any degree of certainty that this is a result you can hang your hat on.

That being said, there was one interesting statistic that it mentioned which did make me go “hmm”: Google search results. Here’s a quote directly from the article and the graph they had to support it:

“The average content length for a web page that ranks in the top 10 results for any keyword on Google has at least 2000 words.“ 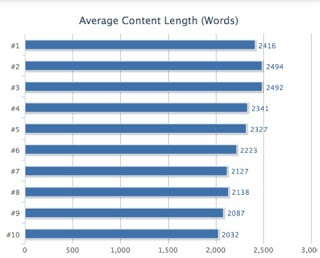 So maybe there’s something to a post or article with a bit more meat to it. As for all my posts, as I eluded to above, views to word count isn’t a direct comparison because so many other factors go into each one. Did I tweet about it more often? Did I post in a comment thread on another blog or article? Did I try to engage my audience or just pump out noise? Ding! Ding! Ding! Here’s a pro tip for you: engagement works but it takes work! Frankly, I’m okay with the traffic I am getting for the amount of work I’m putting in. I know when I try to do more with it I get more impressive results, and sometimes that’s just what I do, but I have to be realistic with my time. Blogging isn’t my full time job. Heck, it’s not even a job at all. It’s a tool and like most tools, it’s all in how you use them.

So, size does matter but the experts agree, content is king. I don’t think this should come as a surprise to content providers and creators of the world. I know I like to ask, “Aren’t people impatient; with the attention spans of small children?” The answer is generally yes, but I have found that this doesn’t hold true for people who actually like to read. Sure, we all like snazzy infographics and quick information, but people who are looking for reputable information and who want to learn and explore new things and are generally curious will usually go beyond the fold to get what the’re looking for.

At the end of it all, and as far as my novel is concerned, agents and editors will have a better sense of what changes are needed to achieve results. That’s why they do what they do and why I’ll gladly pay them to do it. What this means means for me is that I should take as many words as I need to tell the story. No more, no less.

As for this post, well, by the time it’s done there will be 1,171 words on the virtual page. I’m already curious to see how many views it gets.